Kicking Myself in the Feels.

This weekend, one of my brothers is getting married. Well, he’s technically a cousin, but he’s one of those love-him-like-your-own-brother cousins. We grew up together and spent entire summers together at my grandmother’s house at Lake Norman just north of Charlotte, North Carolina. This is the place where I learned (against my will) to bait a hook, to swim, to drive a jetski, to catch fireflies, to snap green beans, all the words to Total Recall and Terminator 2 and the entire score of Super Mario Brothers on SNES. 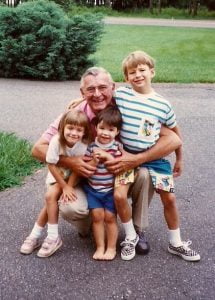 This photo was taken in the summer of 1991, if I had to guess, and is me, my brother and my cousin Mike on the far right with our Grandaddy. This was before Grandaddy accidentally lit the juniper bushes behind us on fire because he’d thrown a lit cigarette into it. (Oops.) It was before I slammed my finger in his car door by accident trying to steal his cigarettes so I could flush them down the toilet. It was before Mike and I drew pictures of a headstone with “RIP Pap” on it and left it on his pillow. It was before we finally helped convince him to stop smoking cigarettes a few years later.

It was before we lost him suddenly in 1998 when I was just 14. And I know that for me, it’s never really been easier as the years go by. In fact, I feel frustrated that I can’t remember him as easily as I used to.

It’s celebrations like this weekend’s where I think about him the most. This weekend, as I watch Mike marry his lucky lady, I won’t be able to help but wish that Grandaddy could be there celebrating with us. But this wedding will make Sarah an official Pierce, and instead of focusing on the Pierce we lost, I’ll focus on the Pierce we’re welcoming into our family.

Happy wedding day, you ugly self. I’ll be the pregnant lady in front (because short) wallowing in her own crazy lady hormones.

I love you to pieces.