Thoughts on Two (And a little sh!t)

Oscar and I have almost made it through one month with two kidlets (Alex will officially be a month old on Friday). The weird thing is that two children is not necessarily harder all the time. It’s harder at times, but not exponentially harder. I remember reading this somewhere before Alex was born and thought, “How is that possible? It’s twice the work!” But I think since  I don’t have the “holy-crap-they-let-us-leave-with-a-baby” feelings the second time around, it’s made me a little more laid back. However, one day last week became the exception. A day that I managed to step in poop mere minutes after cleaning up puke. (If you’re one of those “I don’t want to read your gross poop/puke story” type folks, you can skip the next two paragraphs. But I’m just tellin’ it like it is.)

The story goes like this: Grayson woke up from his nap Friday afternoon with a nasty cough and I think the poor kid hacked so much that he’d gagged himself and woke up in a puddle of puke. I cleaned him up and threw everything in the washing machine on “sanitize the hell out of these” and brought him downstairs because Alex was starting to cry and needed to eat. A few minutes in, Grayson tells me he has to potty, so in a difficult decision of making my sweet baby cry and ending up cleaning up a messy toddler potty situation, I stopped feeding Alex and helped Grayson. He was still in his pull-up (which he wears at home during naptime) and I didn’t realize he’d left a little surprise in there before I yanked it down and helped him on the toilet. Thus, I didn’t notice when I stepped on it. In bare feet. ICK.

After cleaning off my foot, I had to run upstairs to grab Grayson some clean underwear while my poor sweet baby was now howling because I’d stopped feeding him. What’s a momma with only two hands to do? A screaming newborn, a toddler repeatedly yelling “Mommy, I’m all done!” from the bathroom, and my MIL walks in to help me at that exact moment which made my furry idiots go berserk barking like they’d just run through a sea of squirrels. Chaos does not accurately describe it. All in all, I had to laugh. And drink a beer with dinner. And scrub my feet extra hard during my next shower.

So yeah. Two children – harder sometimes. But most of the time, not so bad.

Maybe we’re lucky. Alex seems to be getting the hang of telling his days and nights apart, and (knocks on ALL the wood) our nights haven’t been so bad. Sleepless, yes. Godawful, no. He falls asleep between 9-10:00pm, sleeps until between 1:30-2:00am, then eats again. He goes right back to sleep at first wake up, then wakes up and eats again between 4-5:00am. The second wake up is harder to get him down, and we usually have to sway or rock for 20 minutes or more to go back to sleep. After that, he sleeps until 8-9:00am depending on when he fell asleep. I’m usually getting around 6 broken-up hours of sleep a night, which is more than some people get without a newborn. So, I’m good. I’m really good.

I’m also starting to train him to sleep on his own during the day instead of in my arms, and we’ve made some progress. He’s slept in his crib once or twice, but mostly enjoys napping in the swing. I also broke out our baby carrier, which he loves. Although wearing him around the house is much like being 9 months pregnant, and I can only do it for so long. Once I’m 100%, that’ll be a little easier, I imagine.

Oh right – My guts appear to be healing nicely. Last week I think I had a few days where I overdid it a little, and I had some light discomfort for a few days. Kinda feels like running without stretching and you have that annoying stitch in your side. Overall, the c-section has been an easier recovery for me, but because I had a more difficult recovery than most with Grayson, some may disagree. As predicted, the absolute hardest thing has been to accept help. Thanks to some amazing folks, we didn’t worry about meals for the first week or so, and my family has also been gracious enough to help get Grayson to and from school as well as spending a couple hours as needed so I can get stuff done during the day.

I am a lucky, lucky girl. I have a dedicated support system in both family and friends and three boys that I love to the moon and back. Even after stepping in poop. 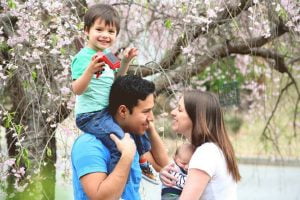