We’ve all heard that quote that’s mis-attributed to Benjamin Franklin about “beer being proof that God loves us and wants us to be happy,” but I’m fairly certain the same can be said for tacos. In fact, I’d argue that tacos > beer. (Keep your pants on, beer drinkers. I love a good craft beer, too.)

But have you ever seen an unhappy person eat a taco? Like, really unhappy? If the answer is yes, in the words of Garth Algar, “Gee, I feel sorry for whoever that is.”

My love affair with tacos started when I got married. Oh sure, I’d had Mexican food before, and growing up, taco night was a regular in our dinner routine. But they were hard-shell tacos with ground beef, lettuce, tomatoes, sour cream and some shredded cheddar on top. DELICIOUS, mind you, but not a true, authentic taco.

I didn’t have a true, authentic taco until sometime in 2007, and unfortunately, I can’t remember an exact date. Oscar and I had started dating and he had been slowly introducing and re-introducing me to the family at parties (It took a while to remember all the names. He also drew me a family tree diagram). One time, we were gathered at Oscar’s parents’ house for a party. It was warm, and everyone was shuffling around the assembly line of food laid out on the outdoor kitchen counter. Carne, tortillas and cebollas were on the grill, and I wanted to get out of the way, so I filled my plate with some meat and rice and grabbed two tortillas right out of the bag and went to find a seat.

Right out of the bag.

Oscar’s grandfather, who was sitting nearby, looked up from his plate, took one look at me, and shook his head back and forth.

What you DO want, however, is a soft, pliable tortilla that’s been warmed up on the grill or on a skillet. (I’ve seen Pilar flip them with her bare hands on a stove top–she is much braver than me. I use tongs.)

Anyway, shortly thereafter, Oscar came and sat down next to me and had a little chuckle at my expense. He shared that there was a whole stack of warm, soft tortillas that had just come off the grill, and I should get them from that stack. Always from that stack.

I said something to the effect of, “Ohh, that’s probably why your abuelito was looking at me funny.”

Anyway, since those first few parties as a new member of the Velez clan, my love for tacos (and Mexican food, and culture, and everything) has grown exponentially. To quote my boys’ favorite book, Dragons Love Tacos, I’ve eaten “Buckets of tacos. Pantloads of tacos.” Probably a whole boatload of tacos. (Seriously, do yourself a favor and read/buy that book. Hilarious. You’re welcome.)

I’ve also been introduced to a whole Pandora’s Box of taco filling options. Chorizo? Good! Carne asada? Good! Egg and avocado? Shove it in my noise hole, please and thank-you.

A handful of times since then, I’ve found myself jokingly saying that my ideal job would be to write content/social that revolved around Mexican food, preferably tacos. Can you imagine? Tweets about tacos! Blogs about tacos (I’m off to a good start.)! Instagram photos of tacos! 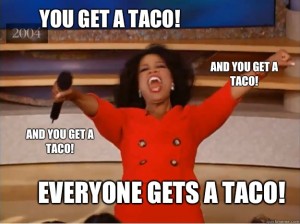 Every social channel gets a tacooooo!

Until then, I suppose I’ll settle for writing about them occasionally here, and perfecting my corn tortilla-warming strategy.

And remember folks, never, ever eat them right out of the bag.