The Story of the Kid Who Couldn’t Wait

Two and a half weeks in after bringing Alex, aka the Kid Who Couldn’t Wait, home.

Monday night (March 10th) Oscar and I went to Longhorn Steakhouse for dinner. (Grayson stayed with my in-laws since we had to be at the hospital so early the next morning.) I wanted my last meal before I had to fast to be a good one, so I requested Longhorn, because, who doesn’t love steak and potatoes? Dinner was delicious, and we came home and I finished packing up my toiletries and got into bed around 9:00pm, since we had to be awake the next morning at 4:00am.

I think not 10 minutes after I laid down I felt an uncomfortable pop and thought Alex had kicked me square in the lady parts. “Ouch, son!” I remember exclaiming. Oscar asked if I was alright and I immediately realized that I was dribbling. I ran to the bathroom and sure enough, I was 99.99% sure that my water just broke. I called Cherokee Women’s and left a voicemail. They called me right back and confirmed that yes, my description sounded accurate and I should go ahead and make my way to the hospital. At this point, it was nearing 10:00pm, and all I wanted to do was sleep before having a baby, but I relented that it simply wasn’t going to happen, and we packed up and left for the hospital.

The drive was a calm one, although I kept lamenting that Our Son Who Couldn’t Wait just haaaaad to come 8 hours too soon so we didn’t get any sleep. Oscar insisted I have two towels underneath me, in since we took his brand new work car to the hospital. At first, I thought he was crazy and being a little overprotective, but by the time we made the 20 minute drive to our hospital, I was glad I had them. And I kind of wished I’d had a diaper for myself.

We signed in and I was wheeled up to labor and delivery, where they assigned me a room and started checking all my vitals. One of the nurses told me I was around 3 centimeters dilated and wanted to know if I still wanted the planned c-section or if I wanted to push. I basically said, “Oh no thank you – no pushing today. I’d like the c-section.” She said they’d go prep the OR and let the doctor on call know.

The time in between when I arrived at the hospital and before the epidural is kind of a blur now. Nurses came in and out of the room as they needed to, checking my heartbeat, Alex’s heartbeat, and pretty much everything in between. They started my IV and it seemed as though the anesthesiologist came in shortly after. Since it wasn’t my first epidural, I vaguely remembered the protocol – hunch over on the hospital bed, squeeze the bejeezus out of husband’s hand while remaining extremely still so that the needle went straight into my spine. I felt her insert the hollow tube and slowly after that, was all pins and needles from the waist down. I was feeling pretty good for a while when she came back in and said, “we’re going to play a little game. I’m going to poke you with this pin and you’re going to let me know if you feel anything.” WHAT A FUN GAME! She started and I could still feel a light touch in the middle of my stomach, but past my navel was nada. Even when I tried really hard to focus to see if I felt even the slightest touch, nothing. And the weirdest thing was, I could still wiggle my toes. 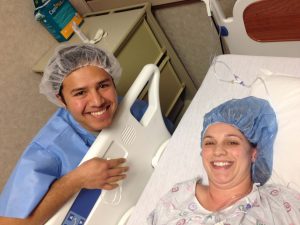 She came back in after a while and we played the game again, only thing time, I felt nothing. No pain .pricks or tickles whatsoever, but I could feel pressure. She explained that during the procedure, I would continue to feel pressure, but never pain. I would feel them pulling on my abdomen or could feel them pressing down to help get Alex out, and that’s it. Kind of scary, and I couldn’t quite understand how I was going to feel things but not really feel them. The chills from the epidural also started before they wheeled me in, and my teeth wouldn’t stop chattering. Annoying, but a small price to pay not to feel your guts being split open. Finally, just before 1:00am, they wheeled me into the OR and covered my arms and chest in warm towels, which instantly stopped the chattering. I watched them place the long blue screen in front of me, and then sort of remember them bringing Oscar around (scrubbed up) to sit with me on what he coined the “safe side of the curtain.” 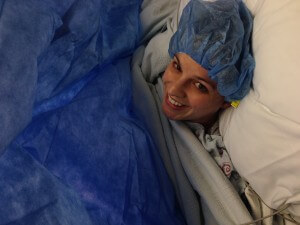 I don’t really remember much about the surgery itself. I was awake and remember talking to Oscar, but I don’t remember what about. I remember wondering if they were still prepping me after I’d been laying there a while and my doc said, “Oh no, I can see your uterus!” (AWESOME.) Since I was laying down flat, I couldn’t tell you much about the surgery itself except that I felt lots of moving around in my lower abdomen. I was wheeled in there around 1:00am and by 1:35am, I heard the nurses and doc say “congratulations.” I heard Alex cry, and then a few minutes later they brought him over so I could see him. “He’s white!” I remember Oscar saying. “Obviously,” I thought to myself. “You married a white girl.” 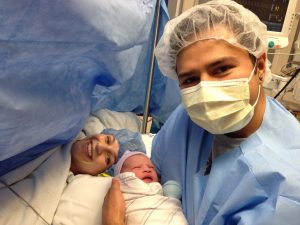 I remember even less after that. Oscar left the room to go with the nurses to the nursery to watch Alex get all his newborn testing done. They still had to do my tubal ligation and sew me back up, which took another 45 minutes or so. I catnapped throughout the rest of the procedure, looking at the clock on the wall throughout to monitor the time. 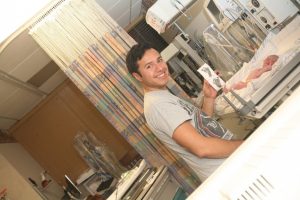 Finally, I remember them pulling down the blue curtain and moving me onto my hospital bed and wheeling me back into my recovery room. Shortly thereafter, I finally got to hold my sweet boy – all 5 pounds, 6 ounces of him.

Happy Birthday, Ian Alexander Velez. Your Daddy and I are so in love with you already. (And it doesn’t hurt that you favor your mama.)