“When a dog runs at you, whistle for him.” – Thoreau

I’m particularly more moody today. Not that I sit around pulling an Edgar Allan Poe on any given day, just day I’ve noticed that I’m not myself.

It noticed it especially after Oscar told me a tiny bird flew directly into his truck door while he was driving. He saw the wing flutter out of the corner of his eye and turned around and he was on the asphalt.

All I wanted to know was, “What kind of bird?”

We hung up the phone and I got choked up. Normally I’d like to think something like that wouldn’t ruin my morning, but I can’t stop thinking about it. Today was that little birdie’s last day. I think it hit me particularly hard because tomorrow is my childhood pet Dakota’s last day.

I know it is. She’s 15 1/2 and she’s had a good run. Last night on the phone my Mom told me Monday was a bad day. They came home from work and she was laying in her own poop. She couldn’t stand. She’s probably in a lot of pain.

Dakota was the first dog I actually remember (my parents had dogs when I was a toddler). We got her the summer of 1994, just after I turned 10. I’ve been a dog person ever since.

She taught me so much. I didn’t think it was really possible to love an animal unconditionally. Even when she ripped up my stuff or constantly swiped garbage out of the trash cans, it didn’t matter. When I moved in with Oscar (technically, a month before I even moved in), we adopted Leela, and I’ve been able to feel that love all over again. It’s stronger this time, because we adopted her at just 9 weeks old, so we (ahem, Oscar) had to potty and crate train her ourselves.

But this post wasn’t about focusing on being upset. I’d rather focus on the idea of a car decal mantra that I love so much – Wag More, Bark Less.

I think I’ll try to keep that in my thoughts today instead as I remember my sweet girl. 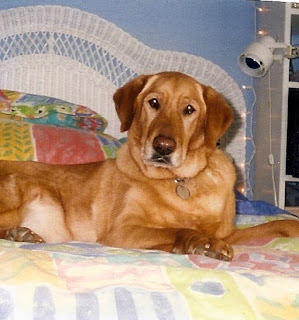 Edit: I wanted to add this video my Mom put together.

In Loving Memory of Dakota from Marianna Barton on Vimeo.

My parents are having her cremated and she’ll technically be back with us next week. As weird a thing as it is to be happy about, my Mom said I get a little urn to have a part of her with me at my own house. I just hope I can give Leela the same love. <3