What to do when there’s nothing to do

First three days of being unemployed have been surprisingly busy.

Sunday night I laid in bed thinking I wasn’t going to have enough to do. That I’d be sitting around the house bored out of my skull having conversations with the dog.

She has, however, followed me around everywhere – the bathroom, the kitchen, my office, and has to be rightthere next to me at any given point in the day, unless Oscar comes home between appointments, in which case she’s down there with him. 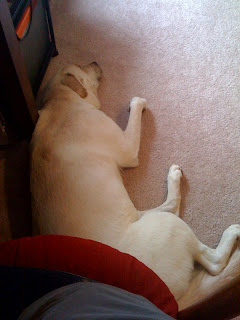 Monday I went to an indie bookstore I’d been continuously forgetting to check out. I had hopes they needed a fabulous new part-time saleslady, but sadly, they didn’t. On the plus side, I found an old hardback copy of Fear of Flying for six bucks. Can’t beat that. Plus, the old book smell is delicious. Came home and furiously worked on my piece for my Zona Rosa meeting next week. Had an early dinner with Oscar before setting off to work with Connie and rejoicing in the 25 minutes it took to shoot down I-75 South to get to her house. A girl could get used to this.

Tuesday I got up early and trudged over to the Unemployment office. I had fears it would be like the DMV or the Social Security office, and sadly, I was both right and wrong. The disarray was right; the types of people were wrong. So many young people like me. As I was walking out of cattle room A into cattle section B I saw a friend I used to work with and she was stunned to hear of my layoff. I stuck around until she finished her errand and we grabbed lunch. I had the best damn corned beef, pastrami and provolone sandwich on rye. No condiments to ruin it. Just the meat and cheese and deliciously creamy side of macaroni and cheese. I could have died a happy girl right then. After my 2-hour lunch break (again, a girl could get used to this), I came home, tootled around on the computer, made some job interview follow-up calls, and went out with my in-laws to La Parilla for Cinco de Mayo. What’s hilarious to me is, this year is the first year they’ve celebrated it. I don’t even know if they knew the reason for celebrating it in the first place. I spent the evening with them, drinking Corona to my heart’s content and stuffing my face with fajitas.

This morning I set a 7:00 alarm and came straight into my office trying to think of my get-money-now plan. I call it that because I have no desire for a get-rich-quick plan, just a plan to actually be able to enjoy work for once. (Does anybody remember a job they actually liked? Does that happen anymore?) Anyway – I came up with my plan (pretty sure, at least). It’s still in the embryonic stages at this point, but I have a goal! And getting there is half the battle, right??

As for this afternoon, I had my first second-go-round job interview. The woman was very nice but I hope I didn’t cringe when she told me the salary – just under half what my old one was. No. thanks. Especially for basically the same job I was doing up until last Thursday. It made me feel even more excited about my Big Plan.

Tonight – Death Cab for Cutie concert at the Fox.