I’ve been thinking a lot, blogosphere (Yeah, I’m talking to all 3 of you).

If you talk to me on a regular basis, you might know that I got a new job (or you could just read it below).  Well, I did.  And for now, it’ll do just fine.  Although something was brought my attention yesterday and I just can’t seem to let go of it.

I was sitting in the parking lot, because I’m not supposed to get here too early, but just early enough, and after I’d adjusted my departure time for my commute, it ended up getting me here too early.  I was on the phone with a good friend and I was blabbering on about all the things I already hate about my new job.  She interrupted me and said:

“Ash, this is going to sound kind of harsh, but it’s for your own good – stop complaining.  You’re kind of a downer and I don’t really want to talk to you if that’s all you have to say.”

Oh. Quite frankly, after I got over my initial feelings of hurt, I realized she was right.

She called me later last night to make sure I was doing ok, which I appreciated.  The goal behind sharing that little detail was not to make her sound cold.  She was doing me a favor, and the sooner I got over my little pity party, the better. One of the reasons I appreciate her (aside from having the ability to tell it like it is) is because she’s doing something she loves.  She’s damn good at it, too, and encourages me to do the same.  It’s teaching.

I realize going from administrative job A to teaching job B is slightly out of nowhere, but if you’ve known me long enough you’d know that it’s not.  When I first graduated from high school, my intent was to be an English Ed major.  I got bored, and the idea of classroom management and pedagogy at 19 years old bored me, so I switched to the regular English track.  Made the grades, graduated in 2006 hoping for some amazing, wonderful publishing company to recognize my genius and give me a job as an assistant editor.  Three years later, I’ve gotten my “been there, made those copies” corporate bullshit card, and I don’t really have much to show for it.  Sure, I was able to save up quite a bit of money.  I certainly enjoyed that little perk.  I met some new people, which was also nice.  I learned a lot about myself.  But I’m still not fulfilled by my job.  I get bored easily.  I need to be creatively stimulated, and I’m not.  Not one bit.

When I got laid off back in May, I thought that would be my ticket to my “dream job.”  Not quite.  Although, it did force me to jumpstart my own little side project, which I’m still working on and gaining clients for here and there.  It’s something I love doing, and maybe eventually I’ll be able to make it a career.  For now though, it doesn’t cancel out the void I feel with my day job.  And because I know I pretty much have to have a day job (family, responsibility, yada yada), I may as well be one of the lucky few that enjoys their work, right?  Otherwise, I end up being that asshole that nobody wants to be around because all they do is complain.

So, here we are.  Or rather, here I am.  I’ve already thought about going the teaching route a few times before now.  I always talk myself out of it, because frankly, I scare easily. It’s a fault among many.  I think about the certification tests I’ll have to take (ohh, the tests!  the horror!  the head-scratching!), worry that maybe I’ll end up hating teaching once I get inside a classroom (a copout), worry that my kids will overthrow me (possible, but nothing a few classroom management classes couldn’t fix), the list goes on.  Mostly, I just haven’t bothered with my follow-through.  I’m not really sure why I’m so scared to commit to such a big step.  Maybe it’s just that – it’s a Big Step.  Saying “yes” when Oscar proposed was natural.  This actually takes some thought and preparation.

I have no idea about the timeline, either.  The sooner, the better, ideally. Usually the timeline issue is what throws a wrench in the whole operation.  It fizzles and I’m back to square one.

So I guess I’m looking for feedback, mostly.  Encouragement, maybe. Or a little of both if you’re feeling extra generous. 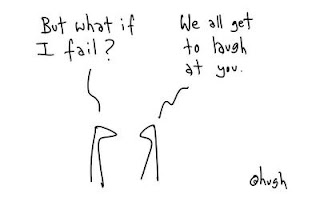