On my way to work thing morning, I was sitting at a light behind an SUV that had a Wag More, Bark Less sticker. I really liked it. The message is so simple, but yet I always seem to forget that little gem. It made me think of Leela, of course, who’s been with us a year next Sunday. I wasn’t living at the house yet when we brought her home, so I’m pretty lucky that I didn’t have to tend to her all-night whining fests when we first adopted her. Oscar took care of her like a champ, and rarely complained (he’ll be great at nighttime bottle feedings too, I’m sure of it). She was the most adorable little puffball on the planet, as evidenced here with some of her first pictures. 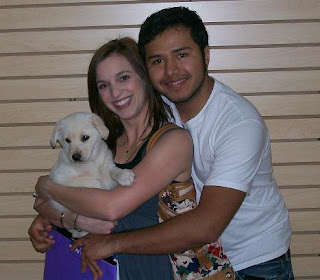 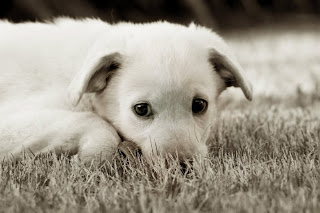 Training her was no easy task. The very day we brought her home she waddled over behind Oscar’s tv and pooped on top of his roommate Alex’s bookbag and an Xbox controller (which was positively hysterical to me. The controller, not the bookbag). We immediately learned that she was not to be trusted ANYWHERE. A few weeks before I moved into the house officially, we put up a fence. It was a little bit pricey but I was able to manage (thanks, stimulus money!) because I knew she’d grow quickly and would need a yard to play in.

We also signed up for puppy training classes at our local Petsmart and after 8 weeks, she done graduated. It was great for her and great for us – I was clueless when it came to how much work she would be. I didn’t have any experience in training a puppy, but thankfully Oscar had, and we successfully taught her a handful of commands. During the classes, I noticed that she had been growing like a weed but hit a lull towards the last couple of classes. I wanted her to get huge – 75 pounds or so – because I’ve always wanted a big, lovable dog. I remember telling my Mom that I wanted her to get bigger, that I didn’t want her to be puny, and she joked, “Well, we wanted you to be bigger, too.” 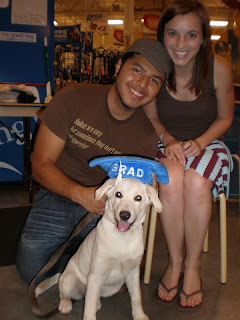 Since then, she’s grown to about 55 pounds, which is a good weight. She’s not uncontrollable. She’s also (just recently) gotten to the point where Oscar and I can leave her out during the day while we’re both at work, which is great because we both felt so terrible about keeping her in a crate. She’s shown she’s trustworthy enough to not rip up the house and pee all over everything (monumental!).

What it comes down to I guess is that she’s a part of our family now. Oscar and I love her as our own little furbaby, despite all the clothes she’s ripped holes in (mostly Oscar’s, ha) and shoes she’s eaten (mine, ugghh), and little “surprises” she’s left us. It makes me look forward to being a parent even more, because I imagine feeling proud/content/genuinely happy is tenfold. 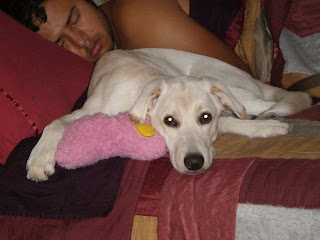