I essentially have two brothers. I have my younger brother Ian (who really is my brother) and my other older “brother” Michael, who’s really my cousin. We spent so much time together as kids that he’s practically my brother, and I tease him as such. We spent entire summers together up at my Grandma’s lakehouse. I think it’s safe to say he’s one of my favorite people in the world – he always knows just what to say (even if he doesn’t know it) to make me laugh. I did a random search of all our Google chats, and here’s some of the funnier snippets I came up with –

Upon sending me this picture – 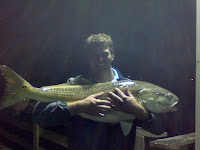 Michael: i got one that looks like heaven is shining down
me: hahaha
me: very cool
Michael: alotta long nights with no fish waiting on that puppy
me: haha
Michael: oh man the weather is so nice right now
70 degrees
63 at night
me: It’s colder at night here
Michael: yeah
me: but still about 70 today
Michael: did you see my fish?
me: I did, I got both pictures
Michael: NC is sending me a letter in the mail
a “citation”
essentially informing me of how badass I am and my skills

* * * * * * * *
Michael: 🙂
dood
guess what i discovered
these things in the frozen food aisle
called “Steamers”
me: uh, yeah
Michael: they are veggies and like seriously you open the microwave
throw them in there. Cook it
then take it out
and dump it on a plate
and eat!
me: Like magic!
Michael: why don’t people tell me these things!
they are cheap too!
me: yeah, frozen veggies are much cheaper than fresh veggies
and they keep better
Michael: yeah!
and they are almost just as good for u!!!
me: they don’t loose nutritional value being in the freezer, goober

* * * * * * * *
Michael: yuck
you use Tylenol PM?
what u need is a good weightliftin session
that’ll tucker you out
you think our ancestors had the option of knocking back some Tylenol PM?
No
they had to suck it up and run from lions and bears and shit

* * * * * * * *
me: God I forgot how good taco bell is
Michael: lol me too!
i haven’t had some in a long time!
me: me niether
usually it sounds gross to me
but today I was craving it for soem reason
Michael: dude
youre going to get real taco bell
for the rest of your LIFE
me: hahaha
you goober
Well, you can be the one to tell Oscar’s Mom her food tastes like it came from Taco Bell
I certainly won’t 🙂
Michael: u know what i mean
you get to eat Mexican forever
lucky lucky lucky

*One of the funniest home videos I’ve ever seen. My cousin has just caught a Sunfish off my grandparent’s pier at Lake Norman and is explaining how sharp his top fin is. He has the thickest hillbilly accent I’ve ever heard.