The post where I talk about Led Zeppelin. Again.

Some days, I wish I could spend the entire day just getting lost in the Internet. Specifically, looking for a favorite song by a favorite artist and falling down the musical rabbit hole, so to speak.

I was listening to A Perfect Circle this morning on Spotify and remembered they had an album released in 2004 full of covers. Track #11 was a haunting re-make of one of my all-time favorite Zeppelin songs, “When the Levee Breaks.” Since Hurricane Katrina, the song has been referenced a lot more to make connections between the lyrics and the devastation that followed the storm in 2005.

For me, that song speaks to me a special way that I don’t know if I can put into words. It was one of the first Zeppelin songs that I fell in love with. (And I mean, really fell in love with. Blaring on repeat in my 1991 baby blue Toyota Camry as I drove around Alpharetta with the windows down.) John Bonham’s drum beats in that song take me away from myself at age 29 even as much as they did at 16, for even just seven minutes.

If you’ve had extensive conversations about the Led Zeppelin discography with me at all, you’d know that Led Zeppelin IV is my favorite (with II coming in at a close second). Most people might argue that the most iconic track on that album is ‘Stairway to Heaven’ (No Stairway, denied!), but  the way the harmonica and the pulsating snare drum was recorded in that hallway (or entryway, or whatever it was) of Headley Grange just reached out and grabbed me musically. IV was also the album in which the band members recognized themselves with the four symbols, and since Plant’s symbol wraps up my love for all things birds and writing (badly), I have it tattooed on my left ankle. 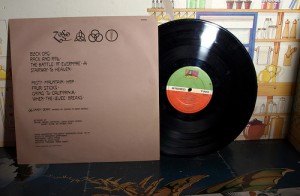 Because of the intense mixing involved with the album version, I found out that the song has only been played live twice. TWICE.

Anyway, back to the history of the original song.

I was doing some wikipedia’ing and discovered that the original track was recorded by Kansas Joy McCoy and Memphis Minnie about a flood in Mississippi in 1927. Blacks were forced to stay and work on the levee at gunpoint, hence the “cryin’ won’t help you, prayin’ won’t do you no good” lyric. The aftermath of the flood helped fuel the Great Migration to the midwest. (Which, one could also argue, helped the Chicago blues movement flourish. Muddy Waters, anyone?)

So why an entire blog post about one song? Because I’m curious – everyone has that “one song” (or many) that defines them. I want to know yours. Share it with me, so we can be musically-inclined geeks together.