The importance of dual languages

I don’t speak Spanish. I wish I did. I understand a good bit of the language in context, but I don’t have the necessary vocabulary to respond in full sentences. As Oscar says, “I know a lot of nouns.” Which is great for being able to point at things and say what they are, but it’s not good for conversations with Oscar’s grandparents, who probably know as much English or less as I know Spanish.

I didn’t take Spanish in high school or college, and also really wish I did. I took French instead, and really, I don’t remember much of that, either. (At this point, I probably know more Spanish than French – kinda sad.)

I want the baby to be fluent in both English and Spanish, even though this may pose a little difficult for me. I think though, as he’s learning both languages, I’ll learn more Spanish too, and eventually maybe speak at the conversational level. I’ve bought him books in both Spanish and English in hopes that when I read him both over and over, the words will start to make sense to me. We have two copies of one of my favorite books as a child, Mike Mulligan and his Steamshovel – my copy from when I was little and a brand-new complete Spanish copy. I think this will help me, because I already know the story so well, and I’ll learn the words that mean the same thing as what I already know in English. 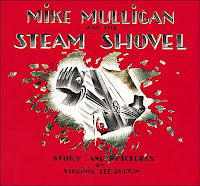 My fear (because of course there is one) is that once he realizes he speaks English with Mom and Spanish with Dad, that he’ll also figure out how to confuse Mom (or my parents, who know far less Spanish than I do) by speaking Spanish – a pretty awkward feeling. It doesn’t happen as often as it did when I first started dating Oscar, but I distinctly remember a few times when I found out afterward that people had been talking about me right in front of my face and I had no idea.

In reality though, since English is my first language, and I’ll probably be at home during the day the most with him, he’ll probably pick up English faster than Spanish.  But I intend to teach him all about both cultures, placing equal importance on the Mexican Independence Day as the United States’ Independence Day. There’s still so much about my husband’s background and culture that I have yet to learn too, so I’m excited about the process of learning and teaching my son as I go.

Any other dual-language families have tips on blending cultures or maintaining the importance of both languages? I’d love to hear your thoughts! (Also, did you read Mike Mulligan and his Steamshovel, too?)