Tattoo do, or tattoo don’t?

This weekend Oscar and I went to All or Nothing Tattoo in Smyrna to talk to someone about starting his chest piece. He’s wanted it for 6 years and has decided that he finally wants to start working on it. I’m supportive if he wants to get it, but I wouldn’t mind if he didn’t, either. Had I married him as a person who didn’t like tattoos thinking I could change him, that would be stupid on my part. I want more myself, anyway.

Upon telling my Mom this news, we had an argument about tattoos which stemmed into discussing women specifically with tattoos. I love my mother very much and we made up the next morning, but we’ve agreed to disagree, which left me feeling caught in the middle knowing that if I really wanted to get the birds on my chest that I’ve wanted for so long, it would hurt me professionally. During the conversation, I equated tattoos with plastic surgery, saying what a person wants to do with their own body should be up to that person, and negatively judging said person based on that choice is a shame. Of course, there are always exceptions, using Pam Anderson as an example – there are thousands of people that think she looks good, not over-the-top. I however, think her boobs are entirely too big, but that’s me. Likewise, to me, having your artwork, something you love, on your body is a really awesome way to show your inner personality, not necessarily a cry for attention. That’s where the exceptions come in again, I suppose.

I feel stuck because I’d love to get a bird on either side of my collarbone. To me (and I suppose a handful of others) it’s sexy. It would accentuate the collarbone, not detract from it, and to be honest, I like the idea of the edge it would give me. However, I could pretty much kiss an office environment goodbye without wearing turtlenecks year-round or fear of someone accidentally seeing them. And, if I got them on my shoulderblades, I’m not sure if I would feel I was settling for second-best, which, if you’re getting something tattooed on you for the rest of your life, seems silly. Even if you’re getting Tweety, you should be damn sure you still want Tweety (or at least think back fondly of Tweety) when you’re 80, no?

In response to something my dad said about all the old people of our generation being covered in wrinkly old tattoos, I thought, seriously – in 50 years, every “active community,” every old folks’ home, and every hospital will be chock full of people covered in tattoos. To me, it’s not gross. The skin will be old and wrinkly regardless of whether it has ink on it, right?

I still haven’t decided what I’ll do yet, but I know Oscar’s made it and I’m happy to support him. I did, after all, marry a man that already has one.

Just for fun, here’s a couple on women that I love – 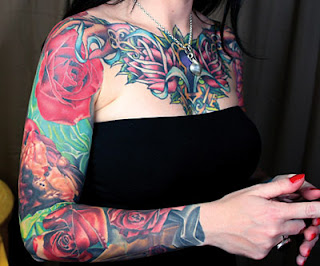 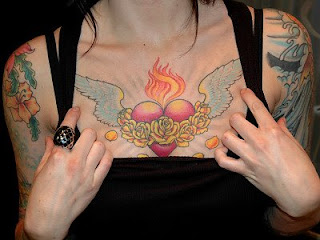 Images taken from here and here.