“Rewrite the narrative,” a friend reminded me this morning, after I spent 20 minutes on the phone with her recounting my somewhat self-inflicted shitty day prior. I had gone down a old email rabbit hole, and spent my lunch break reading emails from 8 or 9 years prior, when I was having a particularly rough period in my life.

When she told me this, my thoughts immediately went to a place of, “But! But! The injustice! The heartache! This happened! These things happened to me!”

And they did. And they were terrible. And for some inexplicable reason, I am, dare I say, addicted to reliving these feelings.

I am addicted to reliving terrible things that have happened to me.

There. I said it.

I know I’m not the only one, and I’m not even the first person to realize that this is something people do.

Earlier this week, a writer named Nicole Cliffe sent out a request on Twitter asking people what their longest-time grudge was. The responses, however funny they were, were also sad. So much anger and pain behind them. 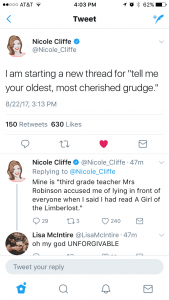 Of course, when I first saw it, I sent it to my Mom with a screenshot of the tweet, I wrote, “OH MY GOD, WHERE DO I EVEN START.”

This is true. I have some very wicked grudges, some going 20 years strong.

These are just some of the first names of people who have hurt me. When I see the names listed out like that, I feel like (GoT SPOILER)… Arya recounting the names of the people on her kill list. It doesn’t particularly bring me joy thinking about them. Not in a traditional sense. But I must get something from thinking about these situations, or else they’d drop from my mind completely.

Of my grudges, my Mom told me that they’re my “little pets” as Reese Witherspoon’s character called them in Pretty Little Lies. (I haven’t watched it, but have been told I need to.)

I’ve written about my rage before, and I know it’s the one emotion that gets me into trouble the most often.

But what if, at 33 years old, I can somehow trick my brain into refusing to relive these moments and actually be free to rewrite the narrative? How freeing that must be?

To actually not give a flying fuck.

My God, that would be the ultimate freedom.