If I thought trying to update was difficult before, boy was I misguided. I didn’t have a 5-week old infant to contend with.

HELLO, most ridiculously-cute time-suck in the whole world. 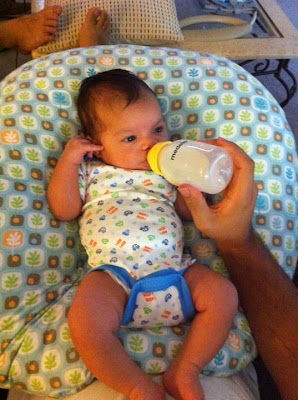 But seriously, my day is now planned in 3-hour chunks. I plan everything around his eating and sleeping schedule, which hopefully in the next week or two will start to transform into a 24-hour schedule. He’s getting better about night feedings, though. Oscar and I have discovered that if we give him a good-sized bottle (about 5 ounces) around 9:00pm, he typically sleeps until 1:00am or so. Then, he eats again, and if he’s a good boy, goes back down around 2:00am. If not, then 2:30, or 3:00. Usually, by 3:00, if he’s not down, he eats again, and he’ll go to sleep. Then he usually wakes up around 5:30 or 6:00am and eats again, and then lets us sleep until 8:00am.

This has been the system for the last few days.

I’ve also discovered that I can get much more done if I stick him in his Moby Wrap and just wear him around the house. He also sleeps longer, because he haaaates being put on his back.

I’m reading all about why this is so in The Happiest Baby on the Block. Apparently, it’s the Moro Reflex, which causes babies to think that they’re falling. They flail their little arms because they feel like they’re falling when placed on their backs. Of course, he’s still too teeny for me to put him to sleep on his stomach or side, so, if I want to get anything done during the day, he goes into the wrap. I love the feeling of being able to wear him (it’s much like being pregnant again), and I love how content he is in it, too.

It’s getting easier, though. Soon enough, I hope to actually write a coherent post, but for now, I’ll just have to settle for ramblings in between naps and laundry loads.