Not to brag, but my parents are going to be excellent grandparents.

I know anyone with a solid relationship with their own parents could say this, but I’m especially confident that they’ll be great. They’re pretty excited about being grandparents, and as I’m nearing into the third trimester (1 1/2 weeks, yay!), I think it’s starting to hit everyone (me, especially) that soon, there will be a new baby.

But enough about the baby (as if he hasn’t gotten enough posts already). (Also, I guess I’m really partial to parentheses today.)

My Mom is going to be a great grandma because:

– She doesn’t want a frou-frou grandma name. I think the one she’s chosen is perfect, and it’ll be easy for the kids to say – “M.” My cousin Mike has already dubbed her “Auntie M”, and “M” is even easier to say, and because really, she ain’t no Meemaw.
– She loves to bake. And who doesn’t love a grandma that can bake a mean cupcake? Nobody, that’s who.
– She’s going to teach them the importance of manners, because she did so with me, and I wouldn’t have it any other way. They WILL know “excuse me,” “please,” and “thank-you,” and will say “yes, ma’am” and “No, sir.” It’s just understood.
– Other grandmas will eat her dust when it comes to creativity. Who made me a jean jacket covered in Minnie Mouse and sparkly puff paint? My Momma.
– She’s anything but boring.

My Dad is going to be a killer grandpa because:

– He wants to build a go-kart track in their backyard behind the fence. And I don’t think he’s joking.
– He found this AMAZING Porsche logo walk n’ ride toy. Need I say more? 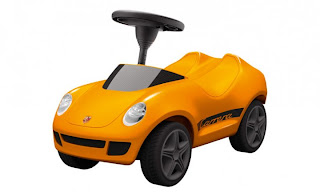 – He will teach my children the importance of the music “classics.” (Maybe he’ll have more luck with them at an early age than he did with me, ha.)
– He has a knack for fixing most things. If a toy breaks, G-Diddy will fix it.
– He has a sensitive side that’s buried a little deep down, but once it’s uncovered, he’s more gentle and caring than any other Dad I’ve ever met.