Magic of the Peacock Feather

I’m intrigued. I had an email waiting for me from my Dad’s favorite cousin this morning. This is a woman that I can probably count on one hand the number of times I’ve seen her (or rather, remember seeing her). I think she’s roughly the same age as my dad, and somehow, having 50-something other cousins, they managed to stay pretty close.

Anyway, to give some background, I took some pictures of my new hairpiece for the wedding and sent it to my parents. My Dad then forwarded it to my second cousin J, who wrote me by far, one of the coolest emails I’ve ever received. 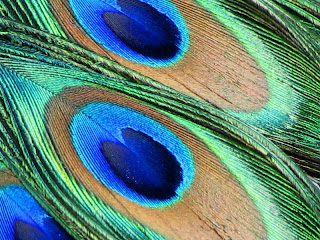 There are many myths and legends about the Peacock feather and their magic, good and bad. I personally have about 150 Peacock feathers throughout my house so I suppose I choose to believe the good.

Overall, the peacock is seen as a “Guardian” and therefore, the feathers are likely to help protect your home & hearth.

However, the magic that struck me when I saw you would be wearing the feathers in your wedding is quite a different matter. How soon do you and Oscar plan to have children and how do you feel about male children versus females. Ha!

Explanation. I had an Eastern Indian friend when I lived in Boston who was surprised to see all of the cherished Peacock feathers in my home. Among the many things she told me about the magic of the feathers was that they induce fertility in a marriage and furthermore, increase the odds of having male children. She scoffed at the notion that female children are considered inferior to males in her country. That is another long story that I will not go into. I guess that particular part of the magic did not work in her case anyway. Two of her three children were females but she and her husband were delighted with all of them.

Anyway…. I think it is a splendid idea to wear them on your wedding day! I wish you and Oscar a blessed marriage and I hope you want children because, as I have told your father, a few grandchildren would smooth out his rough edges quite nicely. Ha!

I immediately Googled peacock feathers. I wanted more info. I found out that in Asia, the feathers of the peacock are considered auspicious and protective. However in the early part of the 20th-century in the West, it was considered very bad luck to keep them in the home (I’ve decided to ignore this because well, who wants to invite bad luck into their home?).

In Greece, it was sacred to Hera, queen of heaven and lawful wife of Zeus — a pair of them drew her chariot –, and they were kept at her temples. In the Roman Empire, peacocks were Juno’s birds and on coins symbolized the females of the ruling houses, the lineage princesses.

And, Flannery O’Connor(love!) and Raymond Carver have both written about them. Talk about good fortune!

24 days and counting. I’ll be sure to get a picture of me with my feathers in all their glory on the wedding day to send to my cousin J. One more piece of good luck for her. 🙂