I have not written nearly as much as I would have liked this year, but I wanted to make a point to at least write about some of the things that helped shape and bring together all of the good that has happened to me in 2012. Here are a few of those somethings.

I’m thankful for an awesome boss, without whom I wouldn’t know all the incredible things I’ve learned about content marketing, SEO, and social media. He is everything I hope to one day be, if and when I end up being a boss. His constant coaching has helped turn me into somebody who played around on Twitter and Facebook while staying at home with an infant to someone who can actually argue the legitimacy of SEO, where it’s going, and what to expect in the next year with social media changes. I am always so energized when I get to work, and I owe that veracity to him and to my other co-workers. I’m thankful to be working with such amazing people who are just as excited to come to work as I am, and who are conscientious, kind and eager to help our clients.

I’m thankful for my beautiful son, Grayson. This year has seen SO MANY milestones for him, starting with him walking in January, to responding to Oscar and me, hand signing, then finally talking, then singing, and now we can’t get him to shut up. (He also, in fact, says “shut up,” courtesy of yours truly. Oops.) Age two has to be the absolute coolest so far, and I love watching the little wheels turn in his head as he’s figuring out the world. He’s copying everything we say, so I do see myself donating many a dollar into a swear jar in 2013. 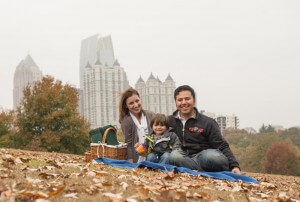 I’m thankful for our sweet dogs, without whom I think part of me would be hollow. Leela is our first pup, and God love her, sometimes she annoys the ever-loving shit out of me with her incessant barking, but when it’s time to snuggle and go to sleep, she is the best pillow. Ellie has filled another part of my heart that I didn’t realize was empty, and I see her sweet eyes each day and know that she’s just as thankful to be with us, too. Oh, I suppose I should also mention our cat, who should be thankful that I haven’t kicked her out of the house yet for her furry, scaly and slimey “presents” throughout the year. Thanks, cat.

I’m thankful for both my in-laws and my parents, who have watched Grayson I don’t even KNOW how many times for us this year. Grayson was lucky enough to have his grandparents watch him twice a week (one day each) up through about August until he started at his school full-time. He has been able to spend so much time with his grandparents, and that is just as important to me and Oscar as it is to them. Besides, who’s gonna argue with a free sitter? Not me!

And of course, I’m thankful for my ever-present constant, my best friend in the whole world, without whom I wouldn’t have had the patience to deal with some of the crap that came my way this year. Oscar is the yin to my yang, one of the only people who can talk me down when I’m all ASH-SMASH and about ready to cut a bitch. And sometimes, the Ash-Smash was directed at him, yet somehow he still managed to keep me from killing him, which I’d call a win for everyone.