“It’s been a long time since I did the stroll…”

The last couple of days have been a crazy mash-up of emotions for me. (In a good way.)

As of Monday morning, I start training for my new position as a web operative at a company geared towards creating internet and social media marketing for small businesses. If you follow me on Twitter or Facebook, you’ve seen me re-tweeting them, Trustworkz, a time or two.

I’ve been in contact with their founder since last fall, and, after a couple of meetings, they’ve decided to bring me on as part of the team starting next week, which I couldn’t possibly be MORE thrilled about.There are a bunch of pro’s, but one of them is that the office is just down the street from me, so my commute is no commute at all. This is huge, and I’m so lucky to have found something so promising so close to my house, considering most everyone in Atlanta commutes into the city.

I’m slowly in the process of working out childcare arrangements for Grayson, and while I’m thrilled (thrilled, I tell you!), to be going back to work, when I was putting him down for a nap this afternoon, I teared up, because I realized that in a few short weeks, he’ll be napping at the daycare center and I won’t see him all day. Forget toddler separation anxiety – this momma is gonna have to adjust quite a bit, too! Thankfully, my Mom and my in-laws have offered to help with Grayson one day a week each, so he’ll actually only be in daycare three days a week, and we’ll save a chunk on costs.

But, as I was telling a girlfriend of mine who also works full-time and has three children in daycare, I feel like I can be my best self when I’m with him after work and on the weekends now, because I won’t be taking advantage of the time we spend during the day, and I’m able to compartmentalize my life a little better, because I’ll have my work and my home.

Finally, in my post last week I mentioned celebrating my employment with a little gift to myself. So, now that everything is official, I’m going to set up an appointment to see my friend Sam Parker at Memorial Tattoo and get this on my ankle: 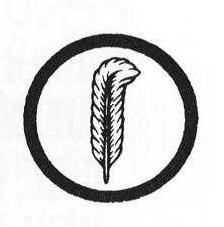 It’s Robert Plant’s symbol from Led Zeppelin’s album IV, but, it’s also the feather of Ma’at, an Egyptian goddess who personifies truth and justice. And, it looks just like a writer’s quill, does it not? 😉