Heartbreaker, Since I’ve Been Loving You, you’ve got me Dazed and Confused. Thank You.*

1998. That’s when I was first introduced to what I now refer to as my love affair with Robert Plant. I was in 9th grade and becoming fast friends with one of my favorite people to this day, my friend Alex. At that point, I was still listening to garbage like Limp Bizkit and Korn (I’m still apologizing to my parents). Alex introduced me to Led Zeppelin (I mean really introduced me – forced me to listen to songs other than Stairway to Heaven, which I still to this day claim is their worst single). The love affair took off. I immediately raided my Dad’s 4-disc Zeppelin box set and bonded with Black Dog, When the Levee Breaks, Since I’ve Been Loving You, The Lemon Song, and others. But I always painstakingly avoided Stairway to Heaven (No Stairway! Denied!).

I turned away from Jonathan Davis and never looked back.

I can’t remember when I decided Robert Plant was my rock god. My parents bought me The Song Remains the Same for Christmas or a birthday around the time I graduated from high school and I watched it repeatedly, lamenting I was never able to see them in concert before the split.

Led Zeppelin are regarded as one of the first heavy metal bands, but I think they transcend the genre. My favorites are the more blues and folk tracks, which was the impetus for my love of Sonny Boy Williamson and Muddy Waters (which I also have my Dad to thank for) and I’ve often tried to answer the “Well, what’s your favorite?” question. The fact is, I have no idea. I can’t tell you just one. They’re like my crack. My Pringles. They’re my “if you could only listen to one artist while stranded on a desert island” answer.

I’ve always joked with Oscar about our “get out of jail free” cards. His is Heidi Klum, I imagine, but I think mine would be Robert Plant (yes, all 60+ years of him). 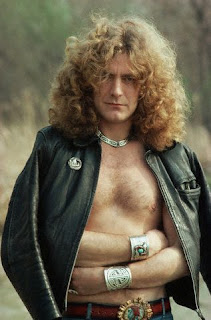 So now I’m curious – who’s your “if you could only listen to one artist while stranded on a desert island” answer? And if you’re feeling extra saucy, who’s your “get out of jail free” card?

*Side note – it took me forever to try and decide on a title for this entry. So I gave up and geeked out.