I have been twice as bad about posting pregnancy updates the second time around. Looking back, I’m not quite sure why I didn’t post more the first time – what did I do all day long?

Anyway, the last few weeks/months have gone by quickly, and last week we found out that we’re having another boy. I am over the moon about being the “Queen amongst the sorry people“, but was a little bummed out not to have a little queen of my own. Logistically though, having two boys is going to rule, since we don’t have to really buy a thing other than diapers and formula. Sure, we’ll have to get replacements of a few items (bottle brushes, pacifiers, etc) but all in all, that’s nothing that a couple of Amazon prime orders won’t fix.

This time around, it seemed like we had an easier time choosing a boy’s name. (I also didn’t have hours upon hours to pore over every single baby naming website there is.)

I’m making far less sacrifices the second time around, too. I’ll sip from Oscar’s beer every now and then, and I’ve had a glass or two of red wine here and there. I’m having about a cup and a half of coffee each day, but I think I brew it fairly weak. Even still, like clockwork, about 30 minutes after I have some I start to feel the little jiggles on the inside. Pretty soon, I’ll be able to start seeing the jiggles, which I’m looking forward to.

Craving: Milkshakes. I’m counting down the days until Chick-fil-A has their peppermint chocolate chip milkshakes again for the holidays. Nothing else that I’m craving on a daily basis, although a few weeks back it was doughnuts.

Feeling: Pretty good overall. Working full-time and toddler-wrangling in the mornings and in the evenings wears me out though, (surprise) and I’m usually in bed by 9:30 at the latest. Starting to get the urge to nest, and over the next few weeks I’ll probably go through the TUBS and TUBS of baby clothes and start to locate which closets all that baby gear is shoved in.

Here’s the most recent belly shot. I’ve been comparing the bellies between the pregnancies and they look pretty close to me: 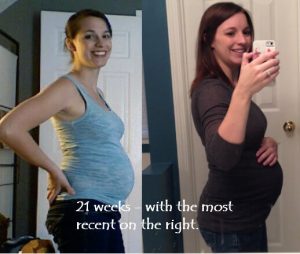 I keep trying to remember how long it took to sleep-train Grayson and just how long exactly I felt like a walking zombie, but I honestly can’t remember that much. I know at 2.5 months we moved him into the nursery from the pack n’play in our room, and about 3 months he had started to sleep in 5 to 6-hour glorious chunks at a time. Here’s hoping we get another good sleeper.

Since I was a week early with Grayson, my guess is this baby will be early, too. My goal is to get my maternity leave situation squared away by the first of the year so my clients and my WebOps know what to expect, but I have a sneaking feeling that I’ll be working in between naps and feedings, because I can’t stay off my damn phone.