Give me an inch…

And I tend to go a little overboard.

I’ve been trying to figure out the nursery bedding for a few weeks now.

(I know, it’s hella early, so before you go all “shouldn’t you wait until at least the second trimester?” on me, know that my wonderfully talented seamstress Aunt has offered to make the crib bedding for the nursery, and I was trying to get her a print earlier rather than later so she wasn’t rushed.  Plus, I’m just a planner like that.)

I looked and I looked.  I already had an idea of what I wanted because I spent mornings at home during the summer/fall looking at crib bedding. (Don’t judge me.)  I wanted blues, greens and browns with an avian/nature theme, regardless of what we end up having.  I think certain softer shades of blue are becoming more girl-friendly, and the idea of any pink in a nursery kind of sends my gag reflex into a tizzy.  I originally found this print collection, Natureology, and liked it very much.  People are using it all over Etsy and it’s very pretty, but the browns seemed a little too dark for the black furniture Oscar and I will probably end up getting, so I continued to search.

I found this online fabric store called Hawthorne Threads and fell in love.  I think I’ve looked at every inch of fabric they have for sale.  I came across this, this, and this.  Really liked them, felt they were contenders, but still didn’t feel like they were it.

Until I saw another pattern on Etsy.  A pattern I had overlooked when I was scouring Hawthorne Threads before.  A wonderful, perfect-in-every-way print with the colors I want and adorable little blue birds to boot. 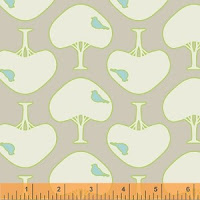 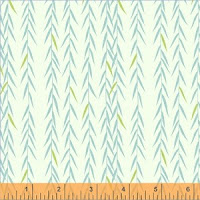 I was following links around to see which other retailers sold the print, and I actually ended up finding the designer’s blog, so I wrote her a note:

Hi there,
I’ve been scouring the Internet for a gender-neutral fabric for a nursery and I’ve fallen in love with the breeze palette in this.  Specifically, the Pear in Mist & Willow in Mist.  Since you’re the designer, I wanted your take. 🙂
What do you think?  My wonderfully talented Aunt is a fantastic seamstress and has offered to make an entire crib bedding set for me.  My original idea was blues, greens & browns with a slight aviary theme.
I would looove your input!

Hi Ashley,
I think definitely YES!  Those two prints will make a beautiful, very soft nursery palette. And  like to think a bit sophisticated and not to baby-ish.  Actually when I designed the line I had a lot of home decor in mind.  I myself have several pillows from the breeze palette on my living room couch.  I think a blue-green is the perfect gender-neutral base color for a nursery.  It’s pretty but doesn’t read “girl” and the blue isn’t a typical baby boy blue.
You’re so lucky to have your aunt to sew for you, so go for it.  I’d LOVE to see pictures when it’s done.  🙂
good luck with the room and especially the new little baby!
Jess

So I think that pretty much sums up my crib-bedding search.  I mean, I have the designer’s blessing, after all. I ordered some swatches just to be sure and they should arrive by the weekend, then I’ll be able to start matching paint color options.