Boy, am I overdue for an update

I kinda suck at this whole “cataloging the pregnancy” thing.  In my defense, I’ve had quite a bit going on, and lately, feel busier than I ever have, which is a good thing.

On April 5th, we found out baby Mango is a boy! 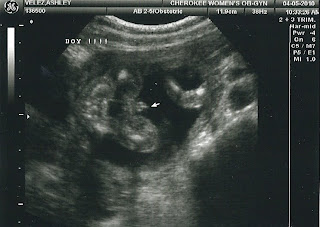 I barely slept the night before, waking up at least once an hour in anticipation.  I was trying to be very calm about the whole thing, but I think it was damn near impossible.  At that point, I was convinced we were having a girl because *everyone* was saying boy. And I had no real intuition about it, I was just thinking everyone else might be wrong.  So when we were in the ultrasound room and the tech said, “Ok, I usually like to have the parents tell me what they think it is”, it was pretty obvious we were having a boy.  I mean, check the picture, right?  At first I was (EVER SO SLIGHTLY) bummed, because I was hoping for little dresses and bows, but then I realized that there are a crap-ton of cute boy’s clothes too, if you know where to look. 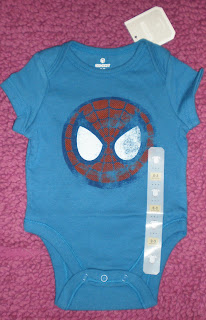 My stomach has been rounding out nicely, and I’m starting to learn that people are SO NICE to you when you’re pregnant! I mean, generally speaking, I don’t run into many nasty people, but they’re extra nice when you’re pregnant.  Friday while at Lowe’s (getting some supplies for my planting extravaganza), the girl said, “Oh, you look like you’re having a boy!” Just like that. MAGIC! She said because women carry boys and girls differently. (Girls tend to be like a tire, all the way around while boys are straight out front.  Good to know.) My bellybutton is thinning out, and soon enough I think I’ll have a little outie, which is hilarious to me because it grosses Oscar out.

One thing I can’t seem to find much information on is gaining weight during pregnancy.  Yes, there’s a ton of pages about “maintaining your weight gain,” but nothing about the weight gain itself.  I’m 21 weeks along and have only put on a few pounds.  In fact, when we went in for the ultrasound, the doc said to up my protein intake and start taking whey protein to put on weight.  Two weeks later, and I haven’t really seen a difference.  Normally, I’d be stoked about this.  But when I’m supposed to gain between 20-25 pounds and I’ve only gained about 2-3, it makes me extremely nervous that little Mango will be premature or that we’ll have other complications.  I’ve always had an active metabolism, and usually I need to eat every couple hours.  Lately, I’ve been increasing snacking, which the doc told me to do, and trying to eat as much protein and healthy fats as possible.  I know every woman’s body is different, and my Mom only gained about 16 pounds with me, so I have to be patient, but it’s difficult when all I can find on the internet is “step away from the pint of ice cream, preggers!” (Ok, it’s not really like that, but still.)

We’ve also started on the nursery.  we have the crib and our dual changer/dresser set up, and the room is a fantastic shade of aqua, which will work perfectly with the fabric I previously picked out.  Still on the major to-purchase list is a glider, which is the only other major piece of furniture.  I saw these awesome shelves over here which I would love to either purchase or find some that are similar.  Alternatively, Ikea’s lack shelves will do just fine.  Once some of the clutter from the past few Old Navy and Babies R Us trips are gone I’ll post a sneak peek picture.

Other than that, I’ve been keeping busy with various projects and Pure Romance parties. Life’s been good.