As God as my Witness, you will not be left out!

In light of beginning to plan my bridal shower, there’s really only one thing that seemed to worry my Mom – the guest list.

I have just a few close girlfriends. Which is perfectly fine with me. It’s a “too many cooks to spoil the kitchen” kind of thought for me. But, one of my dearest, and closest-in-times-past girlfriends is my old roommate Mark.

That’s right. Mark. He might feel extra-special to know that he is the only boy on my shower invite list. All my other guy friends fit the “manly man” bill, but my sweet Mark is just Scarlett O’Hara incarnate. 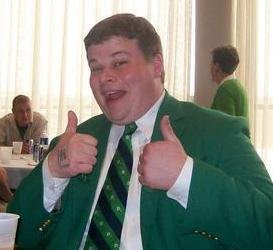 Not having him at my wedding shower would be like having a baby without the pushing – It can be done, but very unnatural. I know my Mom has some concerns because he would be the only male present, and he might make some of the other girls uncomfortable, but the truth is, most of them know and absolutely love Mark, and might feel the same about him not being there.

As for the lingerie part, I don’t think he’d be uncomfortable at all. After all, we did live together, and there was probably a time or two where he saw me in my skivvies.

Besides, he’s coming to my bachelorette party too, and I’m considering having one of those Slumber Parties.

Who’s in favor of having a close male (but ultra-feminine) guy at the wedding shower? Bachelorette party?