My favorite of all days.

Mom and I got up and were almost late, but not under normal people standards. We had to leave at nine to walk a couple blocks to meet the bus for our tour, and woke up at 8:15. This is a normal time for everyone else, but we hate being late, so we felt rushed.

We did however, make it in plenty of time.

Saturday morning was absolutely gorgeous. Just windy enough, sunny, and about 55 degrees. All the other ladies on our Sex and the City tour were starting to arrive. and the bus left around 10:00am.

Our tour guide was too cute. She was dressed well, as I expected her to be, and very, very lively. She immediately told us that our tour was R-rated, and if we didn’t know that beforehand, we could leave. Everyone on the bus loved the show, I imagine, and were all ready for it.

I believe she prefaced the R-rating with, “Now ok, everyone who has seen the show should know all about ‘funky spunk’ and ‘Mrs. Up-the-butt.’ We’re certainly not going to refrain from talking about them on this bus, either.”

(And as a side note: Yes, I did go on this tour with my Mom. To some, that might be really weird. To me, it was absolutely perfect. I wouldn’t have gone on the tour with anyone else)

We started the tour stopping by little places that only people that watch the show religiously would know.

-A church where Samantha sees Friar Fuck. (It’s the cutest little church ever, by the way.)
-A department store where the girls are shopping for perfume and Carrie tells them she’s taking a Lov-ah.
-The doggie park where Elizabeth Taylor gets gang-banged. (trust me, just watch the show)
-the alley where Carrie gets her Manolo Blahniks stolen.
-The gym Charlotte asks a guy out for the first time, gets too excited, and double-books her date night.

And, we actually had field trips, too.

We got to get off the bus at the sex store where Charlotte buys her rabbit. 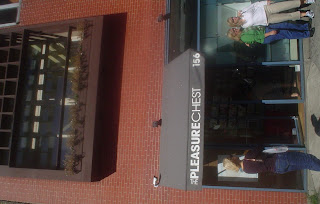 And stopped in the West Village in a park to eat famous Magnolia Bakery cupcakes. They were good, but not line-all-the-way-down-the-street good, and certainly not only 6-cpcakes-alloted-per-person-a-day good. But good, yes. Who am I to turn down a chocolate cupcake with sprinkles???

After the cupcakes, we walked just a block or two to Carrie’s stoop. This was possibly my favorite. I don’t know how many times I’ve watched the show, pretending to walk up the steps to my very own rent-controlled upper-west-side apartment. Ahh, a girl can dream…

We were the first group to get our picture taken at the stoop, so I had extra time to shop. 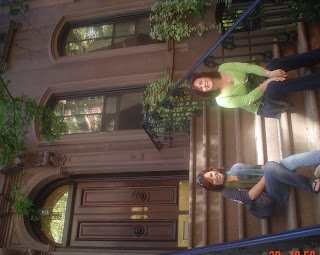 Which of course I did. I found a cute little boutique (I forgot the name, but I took one of the cards, I’ll put it in later) and bought my boss a cute necklace and myself a pair of patent-fuschia ballet flats. So, so cute. They called to me.

The third field trip was the bar that in the show, Steve and Aidan co-owned. The real bar was called O’Neals (I may have butchered the spelling, I’m not sure) and it was down near Little Italy. Lots of hardwoods and really dark, old-world style accents. And, the cosmos were discounted! Yay for us!

Here’s our tour guide inside the bar taking pictures: 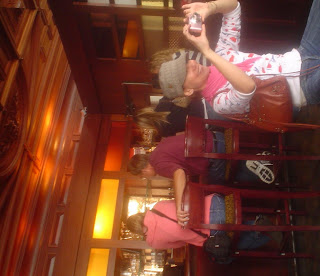 The tour finally dropped us at the HBO store, so we could buy all things Sex and the City to our little hearts’ content. I unfortunately didn’t find anything, but it didn’t keep me from looking.

Our tour ended before my Grandma and Aunts (you didn’t think they went on the super-scandalous tour with us, did you?) and so my Mom and I toured the city some more and waited for them to be done. We stopped off to get some real New York style pizza, which was absolutely delicious.

Came back to the hotel and I actually took a little nap. All that Sex (and the City) kinda tuckered me out.

After my nap, we got ready for dinner and this time went to a place called Thalia for dinner. Apparently, Miss Rachel Ray has nominated it as one of her favorite places in New York, so we decided to give it a shot. Well, homie don’t play! I didn’t have any doubts, but, as I had anticipated, the food was really good. I ate scallops with garlic risotto and spinach with pine nuts. I may forget some little details, because it was a week ago, but I would never forget a meal that tasty. Followed by some red wine and I was a happy little girl.

Our show Saturday night was Les Miserables. Everyone should see Les Miz once. I will say, it was not my favorite of the two (I love American Literature, always have, always will) but the actors did a magnificent job. The sets of this one were more impressive, because they were more detailed.

This one lasted longer, so I think we walked back to the hotel and it was around 11:30 or so. Mom and I fell asleep watching Saturday Night Live, finding a little joy in the fact that it was airing just a couple blocks away.

Woke up and met my cousin for brunch at a place called The Eatery. Also very tasty. I ate jalepeno grits (what exactly is a grit?) with ham and poached eggs, mmmm. It was great to see her when we first arrived and right before we left. I also picked her brain about what living costs are up there, and decided that I’d have to rob a bank to do so, or find a rich boyfriend, neither of which I have. (Ok, he’s richer than I am)

Had a nice leisurely breakfast and then walked back (stuffed) to the hotel and talked for a little while longer. Our towncar left for the airport at noon. We waved bye to the city as we left and I realized I packed an awful lot in three days.