Baby is the size of a lime this week, and is already kicking and stretching.  Tomorrow we have another appointment and I hope we’ll get to hear the heartbeat.  People have noticed that I’m starting to show juuust a bit, which is a little weird right now, because I’m in that in-between stage of just looking like I ate an entire box of donuts.  But it’s funny, too, because the donuts aren’t showing anywhere except right at my stomach.

Anyway, we have our appointment tomorrow, and more than likely, the OB will ask us if we’d like to have a CVS (Chorionic villus sampling) test performed.  At our first appointment, I thought it was something I wanted to do, but upon doing some research, I’ve decided that I don’t think I want to.

My main concern is that the procedure is somewhat invasive (taking a sample of the placenta, either through the cervix or abdomen), and there’s a higher risk of miscarriage if it’s performed.  I realize there’s a risk of miscarriage for the next couple weeks until I’m out of my 1st trimester, but I don’t really want to up that possibility.  Second, there is absolutely no way in hell I will terminate this pregnancy, so finding out whether our baby will be a Down’s (Syndrome) baby is basically an extra step we can just avoid.  What would it prepare me for?  Having a baby and raising a family will be difficult anyway, and how would be know differently if we have something else to deal with, too? It’s just like somebody who had twins or triplets – it’s all they know.

Symptoms: Still having aversions to heavy-sounding foods, with the exception of Pasta-Roni and Velveeta Shells and Cheese, which I consume 3-4 times a week.

Current Cravings: Sauteed spinach. Oscar’s Mom’s tomato soup. Still eating waffles almost every morning.  Sushi rolls and sashimi. of all kinds. Oscar let me cash in my Valentine’s Day dinner early and took me to Izumi, our local Thai & sushi place, and I stuffed myself to the gills with cooked rolls.  They actually have a pretty good selection of cooked rolls, so I think I can trick myself with those in lieu of sashimi and be good until September.

All in all, as each week goes by, I get more and more excited.  I realize that we still have THE ENTIRE SUMMER ahead of us, but by then, I’ll be having showers and getting the nursery all set up, and I won’t even notice.

Continue to grow, little baby lime. I can’t wait to meet you. 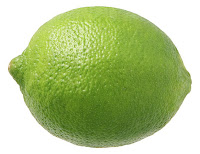